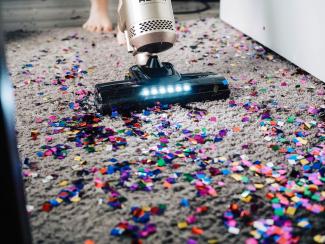 Ken Coniglio | Nov 22, 2022
Brian S. Wesbury – Chief Economist, First Trust Advisors
Robert Stein, CFA – Deputy Chief Economist , First Trust Advisors
We will forever believe that locking down the economy for COVID-19 was a massive mistake.  There is virtually no evidence that death rates were lowered by government mandates and lockdowns.
Business activity in certain sectors would surely have slowed as individuals protected themselves from COVID: think hotels, cruises, restaurants & bars, amongst other services.  But the government didn’t have to aggravate the problem by applying a version of medical central planning.  Doctors, epidemiologists, and scientists can be very good at coming up with treatments, cures, and vaccines, but they’re not equipped to weigh trade-offs that involve costs outside the medical arena, like loss of income or basic freedoms.
There is clear evidence that closing schools caused a harmful loss of learning, which could affect the incomes of future workers for decades, while paying people not to work has warped the labor force.
Economically, the United States ran up about $5 trillion in additional debt and boosted the M2 measure of the money supply by more than 40% during the pandemic, which caused a 40-year high in inflation.  In turn, this inflation led politicians to release hundreds of millions of barrels of oil from the strategic petroleum reserve in an attempt to temporarily reduce energy prices.
In other words, the US enters the decades ahead with more debt, less spending power, an undereducated population, and less petroleum put aside for national defense.  The US has made the future riskier.
At the same time, no one can know exactly what the near-term future looks like.  Right now, the conventional wisdom is that the US faces a recession.  Normally, we would disagree with the conventional wisdom, but this time we agree.  Unwinding COVID policies will be painful.
Most people think that a recession is coming because the Federal Reserve is lifting interest rates.  Last week, the US yield curve was inverted with 2-month Treasury bills yielding more than 30-year notes, suggesting that long-term investors think the Fed has gone too far.
Obviously, raising interest rates has hurt the housing market and imagining more economic damage to other sectors as these rate hikes bite seems straightforward.  However, this is the first rate-hiking cycle in an inflationary environment under an “abundant reserve” model of managing monetary policy.  The Fed has held interest rates artificially low for a very long time, and at least for now, the entire yield curve is still below current inflation rates.
But the real reason we expect a recession is that COVID policies severely distorted the economy.  For example, from February 2020 through September 2022, real personal income increased just 2.6%, while real personal consumption climbed by 6.6%.  And this happened with fewer people working because of lockdowns and overly generous unemployment benefits.  We estimate that Americans have worked about 30 billion fewer hours during the past 2½ years than would have happened if COVID had never hit.
Yet, federal tax receipts hit 19.6% of GDP in 2022, a near record high, in spite of the lockdowns, while corporate profits jumped 23% between the end of 2019 and the second quarter of this year.
The US borrowed from future generations and handed out pandemic benefits that more than replaced lost earnings.  Then it taxed the economic activity that this borrowing created, and kept small businesses closed in many states, while large public companies remained open.  The result is that spending, profits, and tax receipts were all artificially lifted above normal.  The whole economy got distorted and is still untwisting from those distortions.
It’s as if the US economy had a car accident and the emergency responders injected it with morphine.  As this morphine continues to wear off – via rate hikes and smaller deficits – it is hard for us to imagine that these above normal trends will continue.  In other words, a recession is in the cards.
And with that recession, profits are likely to fall.  The combination of lower profits and higher interest rates create a headwind to markets and turbulence for investors.
© 2022 PWA Financial All rights reserved.