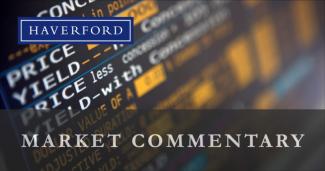 As we look toward the November elections, there are rising concerns over mail-in ballots and the impact that could have on the election timeline. According to recent surveys, up to 50% of the electorate is considering voting by mail, which raises important questions. Can the USPS handle the additional volume? Will the election results be delayed? And what does this uncertainty mean for the markets?

Can the USPS handle the additional volume? Yes.

Due to the COVID-19 pandemic, many voters want to avoid crowded polling locations. Accordingly, we expect the Postal Service will see an unprecedented number of mail-in ballots this year. This process is likely to be fraught with issues, however capacity constraints is not one of them. Mail-in ballots were expected to reach nearly 30% even before the pandemic. If we assume half of all registered voters vote by mail, the USPS would have to handle an extra 150 million pieces of mail between now and election day (75m each way). That may seem like a lot of mail, but the USPS delivers almost 500 million pieces of mail every day. In their busiest period between Thanksgiving and Christmas, 16 billion letters and packages are processed. The agency has said definitively that it can handle the added volume and will adjust its processing and delivery network as needed. So if the USPS can handle the volume of mail-in ballots, where is the issue? The problems lie with state deadlines for requesting and returning ballots that do not allow enough time for delivery before election day.

Will election results be delayed? It’s a possibility.

Many states allow voters to request ballots right up until a few days before the election. This raises the probability of voters not receiving their absentee/mail-in ballot in a timely fashion. In addition, mailed ballots are rejected at a much higher rate due to careless errors, such as missing signatures. Add in the fact that Democrats are much more likely to vote by mail than Republicans, according to recent surveys, and you have the potential for controversy on election night. At the very least, the sheer volume of mailed-in ballots will likely cause counting delays. And twenty states will even allow ballots to be counted after Election Day if they were postmarked on Election Day or before. Election Day could become Election Week, or even Election Month.

How might the markets react to this level of uncertainty?

While past performance is not a guarantee of future results, for insight, we looked back at the Bush-Gore election of 2000. In the three months before the election, the market declined 3.2%, consistent with an incumbent loss for Gore. [Because markets prefer the certainty of the incumbent, the direction of the S&P 500 has predicted every presidential election since 1984, including a win for Trump in 2016]. As the Electoral College took shape on Election Night 2000, it became clear that Florida’s winner would determine the next President of the United States, but the state was too close to call. The country was plunged into turmoil as lawyers, judges, politicians, and election workers fought over recounts and interventions at every level. The battle over “hanging chads” and the resulting chaos sent the stock market down a further 8% in the interim. Ultimately, the Supreme Court ended the recounts on December 12th, handing the win to George W. Bush. The market recovered for a few weeks, but in early 2001 the country was facing a very difficult economic environment. It’s impossible to completely isolate the politics from the other factors driving the market at that time: the bursting of the dot-com bubble and the onset of the 2001 recession, which sparked a deep bear market over the following two years.

We know that market volatility is typically higher in the lead up to elections, as markets reprice the probability of future government policies. This election cycle will probably be no different. However, on average market returns are positive one year after a presidential election, regardless of which party won. Finally, whether or not we have results on election night will not determine the success of the process. A fair and accurate vote, and the potential for record turnout, are the true signs of a successful election. 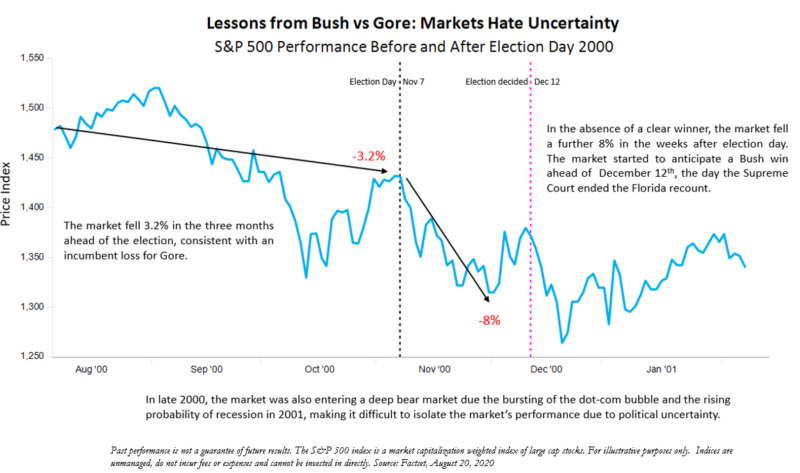